My Experience with the Mantra ‘U’ on the Mountain Taygetos

In December 2007, I went to a retreat on the mountain Taygetos in Greece with friends and people who were familiar with Belsebuub’s work. Taygetos is the highest peak in southern Greece and an old legend says that it was the 1st pyramid ever built on earth. There is however, a big question whether the rock structure is man-made or if it is a natural occurrence.

The mountain was covered in snow and it was very cold, yet the sun was shining and the sky was blue. I decided to go for a walk alone. When I reached a place not far from the group but isolated enough, I decided to lie down on a peak of a hill which was covered in snow and chant the mantra “U”. I chanted the mantra for some time and I felt a deeper connection with the divine. 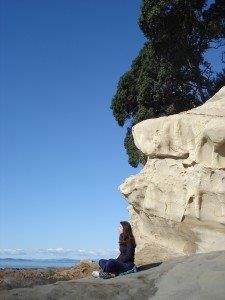 Later in the evening we all sat around a table to eat our dinner and we were talking. For a few moments I caught myself knowing the words a person would say right before he could open his mouth to say them. It lasted for a few minutes and it was obvious that it wasn’t a coincidence and surely nothing I have ever experienced before. The same thing happened to me the next morning with another person.